A VIKING ADVENTURE: 2019 tour of Scandinavia and Scotland 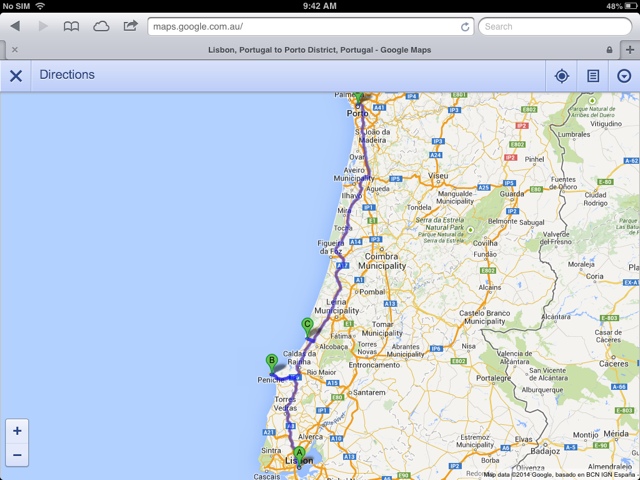 "YOU should have been here yesterday."
Every surfer knows the disappointment of hearing that phrase, which entered the beachgoers' lingo from Bruce Brown's classic 1966 surf movie Endless Summer.
It's always been a running joke in our family whenever Briso friends have come up to the Sunshine Coast for the weekend to find the surf is flat.
But the joke was on us today.
We'd arrived at Supertubos three days ago on our way up the west coast from Lisbon to our accommodation in Nazare before heading on to Porto
Our son was jumping out of his skin at the thought of riding a barrel at Supertubos - the famed beach on professional surfing's ASP World Tour in Portugal.
But of all the beaches we've visited in search of waves through Spain and Portugal, Supertubos had possibly the smallest of any of the 20 or so we'd seen.
Sacres, Peniche, Baleal, Arrifana, Bodeira, Nazare, Oedeceixe, Figueira da Foz - surfers the world over know them as some of the finest surf spots of Portugal, and we had high hopes for each of these.
On their day, they are simply magic.
But when we arrived on our tight schedule, this was not their day.
Portugese lifeguards we spoke to said the best time of year for surf in Peniche and surrounds was September 1 to October 31. Three weeks ago had offered a rare 1m swell.
An informative surf school owner in nearby Baleal said consistent waves could be found there from September to the end of December.
We were just in the wrong place at the wrong time.
And our son had the biggest letdown of the trip.
More hope was offered for our return to Lisbon from Porto three days later.
Yes, you guessed it. Missed the swell by a day. And, worse still, more swell was predicted for the next day ... after we flew out to London.
The best we could manage was 30-60cm (1-2 foot) at Baleal on a mini mal rental board.
Only surfers truly understand the burning desire to get out on the water and try to conquer whatever Mother Nature throws their way in rideable waves.
It is indeed an endless search and an insatiable desire, whether you're Mick Fanning and Joel Parkinson or John and Mary Citizen.
As a non-surfer, all I see are beautiful beaches going to waste as we get out of the car, take a good look around, assess the situation and move on to the next possibility.
So it may seem that on a surfing holiday to Portugal I am a fish out of water.
But I have had to deal with the endless summer search for surf all my life and am quite used to it.
I do enjoy watching how the slightest inkling of something forming out the back gives the males of my family that first tiny adrenalin rush, how they paddle, paddle, paddle in its direction - hoping like hell it will stand up for them - and then each one's familiar style in launching themselves on to it, and milking the wave for all it's worth.
The ritual is good for their soul and mine.
The fresh air, shallow waters for my own little dip and multitude of photo opportunities are simply bonuses. That will always be the case today and tomorrow, as it was yesterday. 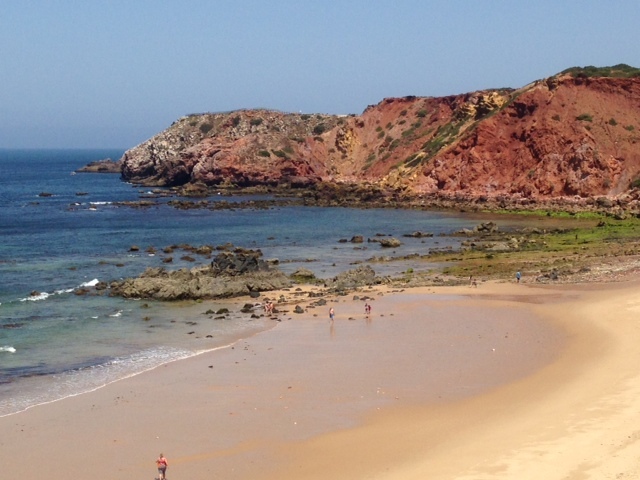 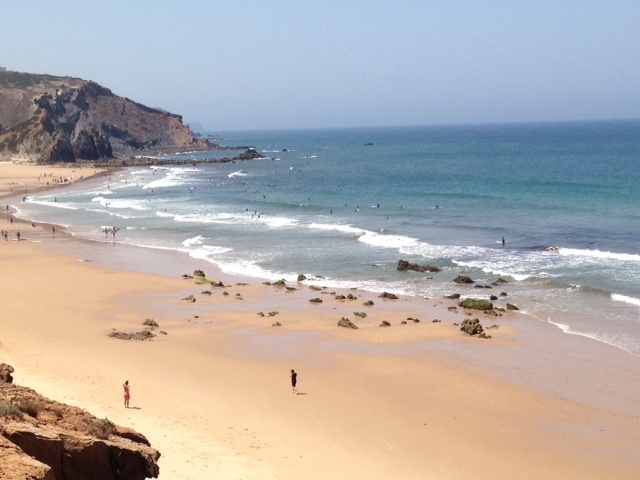 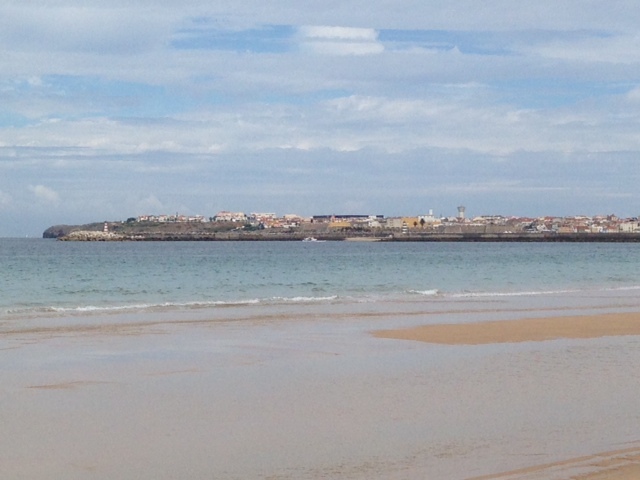 Swell time, regardless, in the Algarve 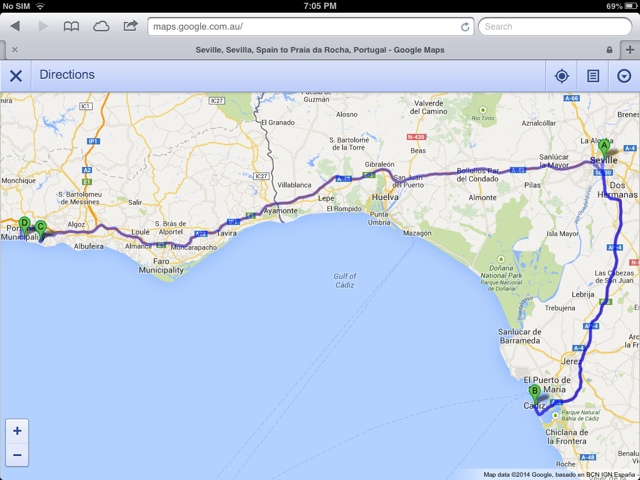 TODAY I did something I never do on holidays.
I did nothing but relax.
Those who know me know that I'm always on the go, trying to make the most of every stop and getting my money's worth of things to see and do.
Of course, today it helped that I was in one of the most beautiful and laid-back parts of the world in southern Portugal's Algarve region.
For the best part of five hours, I succumbed to doing nothing but people-watching in the cool breeze and glorious summer sunshine.
My white sunlounge with green mattress was positioned for shade under a yellow umbrella at the top of the sand for the best view of the emerald clear waters and unusual weathered rocks of one of the western Algarve's finest beaches, Praia Da Rocha, in bustling Portimao.
The long, wide stretch of sand is actually made up of several beaches and coves separated by cloisters of sandstone rock formations and backed by red-ochre cliffs.
Look away from the Atlantic Ocean and it's the Gold Coast on steroids but with a smaller building height.
Otherwise, the rugged coastline is reminiscent of Victoria's Great Ocean Road drive.
We decided on Portimao as the closest possible surf beach from our Hotel Carvoeiro Sol in nearby Carvoeiro.
The online surf report gave us little joy, though.
Our initial search for waves in summer in Portugal was always going to be a big ask, especially away from the west coast.
When they work, the breaks can produce waves of the magnitude of 2m or more and that's why the Algarve has numerous surf schools and surf shops.
But the best waves in southern Portugal generally arrive in winter from November to March.
So today was a typical summer's day: flat as a pancake.
As a non-surfer, they were my kind of waves but my three companions were unimpressed.
So instead, we took the picturesque clifftop walk to find the prettiest, least-crowded beach (praia), bought a blow-up tyre tube and beachball and made the most of the swimming conditions.
The trio even found a nifty cave and wedge between the rocks to hurl themselves against on the tube.
We can only hope for more curvaceous waves as we heard further north to Ericeira, Peniche and Baleal.
Maybe like our anticipation, something will be building at Supertubos beach - a stop on the ASP World Tour- in time for our arrival.
In any case, I can see myself relaxing under beach umbrellas a lot more in coming days, and having to make do with fun on our inflatable "super-tube-os". 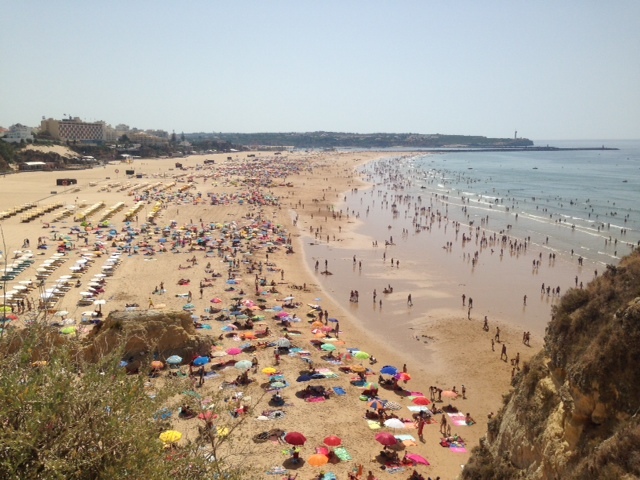 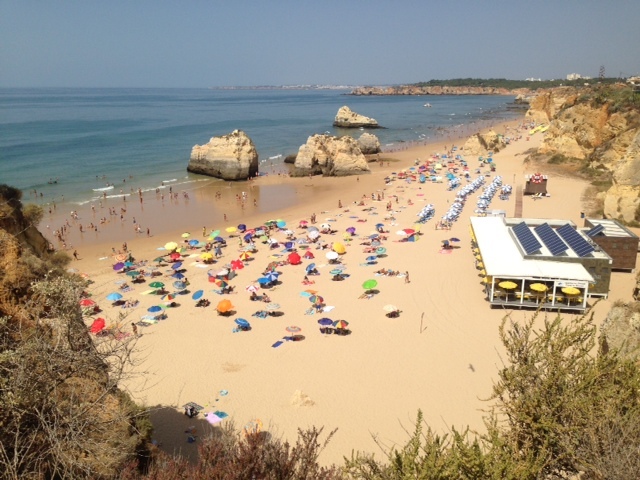 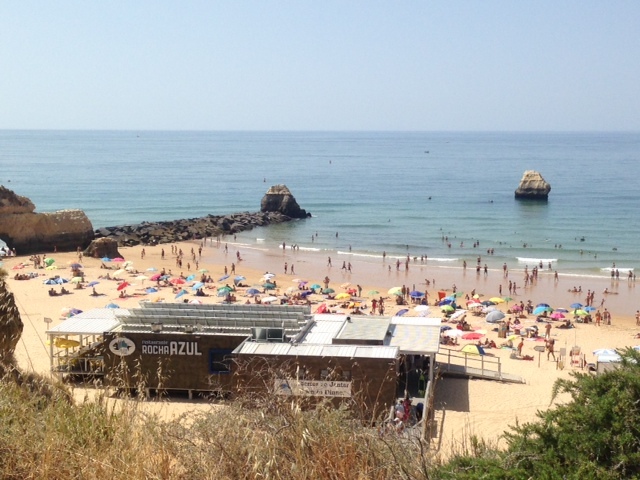 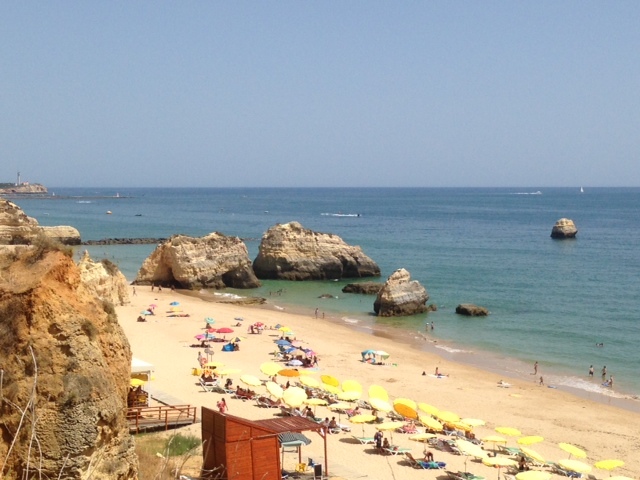 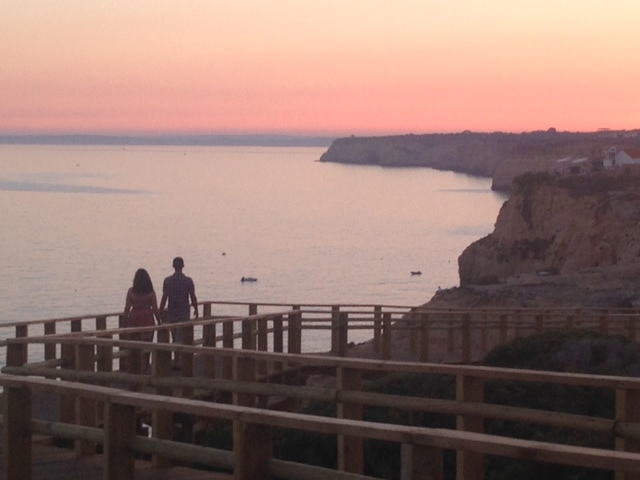 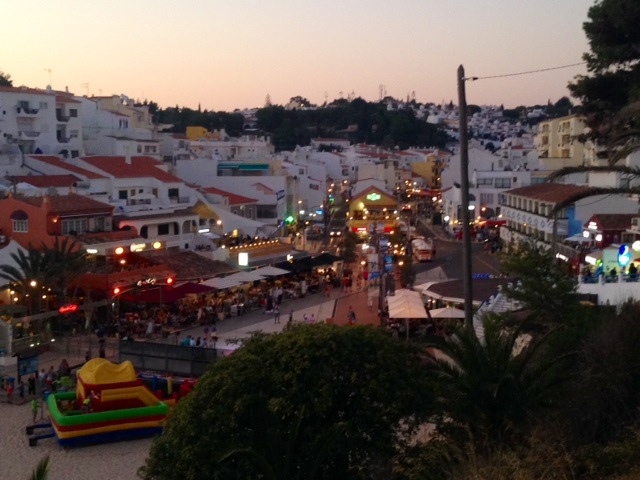 A wake-up call in Granada 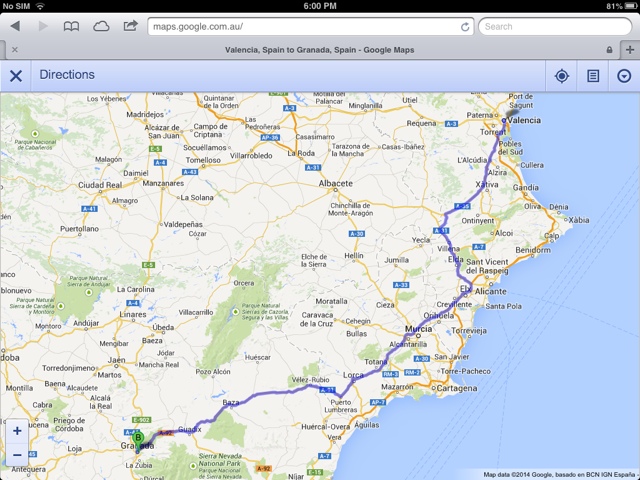 "EVERY day in Europe is a good day. Even a bad day in Europe is a good day."
That has been my mantra throughout this trip.
I've stuck by it even when our youngest son and his partner bought shuttle bus tickets to Pompeii with a global tourist company and then couldn't find the obscure meeting point, were kicked off the tour company's other coach when it was discovered they had made a mistake, and were left in the middle of nowhere to find their own way to the train station and home at their own expense, causing untold concern for us when they missed their scheduled 7.30pm arrival time and didn't get home until midnight.
I've stuck by it even when we knew we'd been ripped off and had to pay undisclosed service fees or for bread and water we didn't order but appeared anyway at Venice restaurants.
I've stuck by it even when the GPS sent us up a bus-only road at Madrid's Atocha Train Station and we found ourselves getting a reprimand in Spanish from the traffic police who pulled up beside us.
I've stuck by it even when our hire rental car company took three hours to deliver the "people mover" we booked six months earlier for 8am for a long trip from Barcelona to San Sebastian, leaving four 20-somethings minding all our luggage in a gutter near busy Sagrada Familia with no communication/wifi to notify them of the delay because we'd already checked out of our apartment.
I've stuck by it even when a stomach upset from a disagreement with the water had me searching for the nearest toilet every 20 minutes and having to pay for the privilege, then stressing about a 90-minute vaporetta ride without facilities to Venice Aiport.
I've stuck by it even when hundreds of photos of Rome, Florence, Barcelona and San Sebastián were lost either because of two faulty camera memory cards or a damaged iPad connection.
I've stuck by it even when we arrived late in San Sebastian after a long day of driving to be told our pension house had been overbooked and we had to sleep two couples to a cramped family room in another pension house and then got no sleep because husband and son snored all night.
But today, my positive outlook is wearing a little thin.
That's because our youngest son came in and wake us at 8am this morning - not because we needed to get organised for our planned trip to beautiful Malaga on the Costa Del Sol, south of Granada, but because his partner's laptop was missing.
A tidy up and search of the apartment in Granada's Old Town proved fruitless.
It seems some time after 2am, when they went to sleep, someone walking down the Albayzin alleyway steps next to the apartment has put their hand through the closed but unlocked window and hit the jackpot.
The opportunistic thief would have had to push the hinged timber shutters open, place his hand through the "jail-like" vertical bars on the window, undo the charging connector from the laptop sitting on the window ledge, then raise the heavy computer vertically through the bars - all while the couple slept immediately next to it on a sofa bed.
With limited power and a password needed to unlock the laptop, it will be of little use to the thief or subsequent buyer except to sell for parts.
Of more concern is the loss of holiday snaps, resumes, original music recordings, and other personal information.
The pair also were using the laptop as their major means of communication while away.
Our hotel manager was helpful and sympathetic, calling the police for us and giving the address of the nearest police station.
We spent the next two hours finding our public carpark, getting to the police headquarters and waiting while a statement was given to a translator over the phone ... instead of driving to Malaga.
Hopefully, travel insurance minus the excess will cover the loss once back at home.
But if nothing else, this is a cold reminder that the GFC hit Spain hard and that desperate people will always be willing to take advantage of others, no matter how careful you think you are with your money and possessions. A tough lesson to learn.
Don't get me wrong: we'll always have our memories of a great holiday and family time in Spain.
But with two more weeks until touching down in Brisbane, every day in Europe from here on will really need to be a good day in Europe. 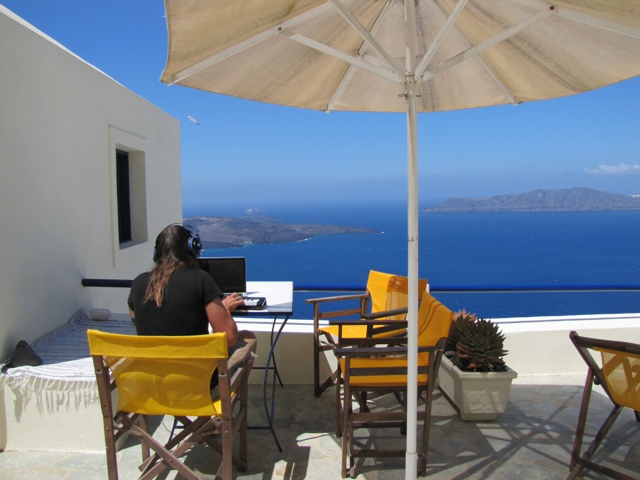 WANTED: The missing laptop, as seen in Santorini.
Posted by Europe 101 at 09:10 No comments:

Europe 101
I am a freelance journalist and travel writer, and former Community Engagement Editor for Sunshine Coast Newspapers in Australia. My passion is capturing my own backyard and the world in words and pictures.